We weren’t successful in getting any of the original software from our first builder nor were we able to get support directly from Redline Weber.   The software they have listed on their site (much of which is broken) for our ECU is very, very old and also broken.

Not to be deterred and having considerable LMGTFY skills, we found others in a similar situation looking for software updates and support for the Redline ECU family.  We saw that the Redline units look to be the same as the Pantera EFI units.  The “Pantera ECU 882C”  follows the same naming convention as the Redline series (see ECU R882 references).  We also found another company called 034 Motorsport selling a similar ECU.

After we dug deeper, it turns out that the Redline and 034 units are rebranded Pantera EFI systems.

For anyone else out there in a similar situation, we’ve compiled a detailed summary of what we’ve found:

Finding 034Motorsport was revealing.  Looks like a great shop dealing with Audi and VW!  The were selling an ECU called the 034EFI which was EOL’d (end of life’d) September 2016 according to a page on their site.   Even though we found this, we were enthused to know that there are quite a few of these “882” units out in the wild.  034Motorsport apparently sold them for 15 years!

Do it yourself support is still somewhat available.  Here are some 340EFI resources:

From what we gathered on various forums, it looks like Redline picked up the Pantera EFI as an ECU to resale to the VW market.   We didn’t get a call back from our voicemail or email and others have expressed frustration with similar experiences.

Unfortunately, the software as displayed on the site is very old and broken so there is not much help there.  Nothing more to be said really. 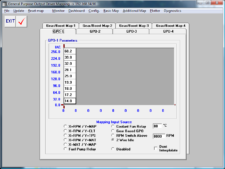